This week in Debating Society, members worked in groups to try and establish a new law.  They had to decide what law they would introduce and write a persuasive speech to prove that their idea was the most important.  The laws proposed were:

All groups worked well to put together a persuasive speech and accompanying powerpoint under a very tight time limit.  The audience vote supported the ban on axolotls and the judge agreed with this decision.  William, George and Henry made a powerful case for protecting this very unusual and endangered creature.  Their speech contained evidence to support their case as well as many persuasive language techniques.

Next week sees the long-awaited House Debating Final!  Viewpoint A take on Foxburrow A to debate whether violent protests can ever be justified. 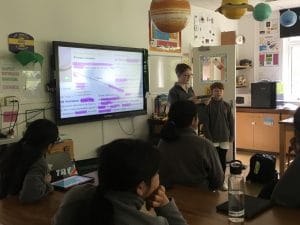