A Cracking Week of Girls’ Cricket

The U8 and U9 Girls cricket teams concluded their season in great fashion. The U8s travelled to Banstead and played in glorious sunshine. Banstead opened the bat and Caterham responded with some super bowling; Charlotte B and Ayla I bowled a maiden, with Katie W and Eugenia only conceding one run off their overs.  A great team effort in the field, held Banstead on 246.  After a tentative start, the pair of Eugenia H and Ceceila H got the ball rolling with Eugenia just missing out on a six with a great strike. Excellent running and communication between the wickets from all pairs gave Caterham the win finishing on 253. Well done to all on a great first cricket season.

On Thursday 9 June, the U9s played Reigate St Mary in their final game of the season. The As have had a fabulous run this summer so were determined to go out on a high. Great opening bowling by Ella D, an early run out by Eden B, a maiden over by Sophie O and improved bowling by Tinu B was just the start they needed.  Khloe G covered ground well, they all backed each other up and four further wickets fell, leaving Reigate on 213.  The team responded well with the bat with Sai, Eden and Trinity picking up several boundaries between them; the final pair of Eden and Trinity put 24 on the board in two overs, with the team only conceding two wickets, Caterham won 261- a fabulous win. Well done girls. The Bs have had a mixed season, all the girls have continued to work hard on their bowling and wickets came from Molly D, Ilya G and Ayla P. Calise, Bea, Sophie E and Sophia A picked up a number of loose singles as they continue to develop communication between the wickets.  The game went to Reigate this time but a super effort by all.

The U11A team finished the season in fine style winning by 29 runs against Banstead Prep. The best team bowling effort of the season, with several girls conceding only one run off their over, a wicket maiden by Mary and a maiden over by Beth. Banstead were unable to make the target of 256 set by Caterham in the first innings. A super effort, and great progress has been made by everyone this term. Unfortunately, Banstead were unable to field a second team so the U11Bs played an internal match mixed with the U10Bs. The U10As also came away with a victory against Banstead; the girls capitalised on the Banstead bowling and hit several boundaries to secure 273 runs. The girls’ bowling has improved tremendously this term and wickets were taken by Aarya (2), Erin, Diya Michelle and Olivia. The U10 A and B teams will face Reigate St Mary in their final matches next week. 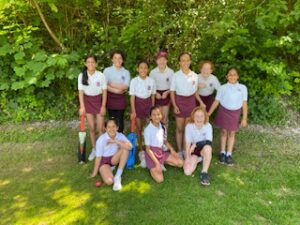 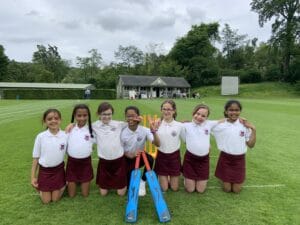 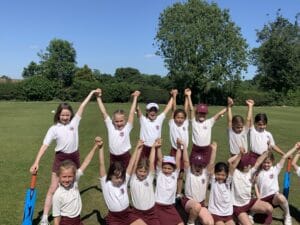 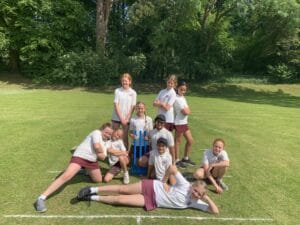